When the situation at work gets very tough, either when we absolutely dislike our jobs or when we are looking for jobs and cannot find any within our qualified scope, we are often tempted to just come out and earn a living doing…anything.

During that difficult time when job assignment sucks, or we have a boss from hell, unsupportive colleagues, etc, geezz….we are so tempted to just sell some fried noodles, fruits or drinks in the street or at a food court. At least there’s just the physical stress but not much mental stress, rite?

If you have entertained such thoughts, read on… 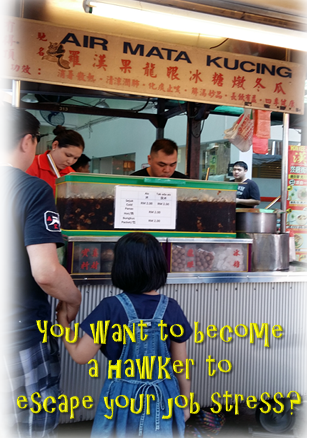 It’s true, folks from the previous generation do actually come out and just become a hawker, peddler, open some mixed rice stall or sell drinks. They ended up making very good money- much better than most white collar folks.  And most of the money is received in cash and that can be easily under declared in income tax.

True stories (honest, I’m not making them up)

A middle aged couple I know who sells delicious curry noddles that have bought a few houses, tore it down and turn them into beautiful bungalows- one for them, one for the kid no # 1, another for kid # 2.

Then a man who sells some yao char koay (a fried flour food that people usually eat with porridge) rented a run down house because the place’s near the market where he sells. But he had already bought a beautiful house in a satellite town decades ago.

A man operating just a run-down looking pet shop bought a land and tore down the old house and rebuilt into a magnificent 3 story bungalow. He then bought over his neighbor’s plot of land for few hundred thousand, tore it down and is planning to built another huge bungalow- for his kids. Originally, he was a very poor kid- he started by actually catching worms from the drain and selling them to fish owners and pet shops and slowly worked his way to owning a shop.

Most of them managed to send their kids to overseas to study but just merely being a hawker.

The picture in this post (the store selling air mata kucing) is famous in Chinatown, Kuala Lumpur. The stall has been selling for years and now have branches.

Do you want their life?

But they also work very hard, sleeping late and waking up at 4, 5 am to prepare the food. And they had to do it everyday- except during a certain festival that they celebrate like Christmas or Chinese New Year where they take off because they are committed to their work. They hardly, if ever took vacations and usually will work on weekends and public holidays because that’s when most people will come out and buy food.

The words ‘lazy’ or ‘I’m just not in the mood today to open the stall’ are never in their vocabulary. Rain or shine, like it or not, they are there on business.

So, still feeling up to it?

Today, some storeowners have gotten their maids to do the jobs for them- but the smarter ones know that they still have to do the main work of cooking- because it’s difficult for anyone to create the exact same taste as them. Many people go to Chinese restaurants because of the delicious coffee and tea made by a ‘master’ that are paid more a lot of money a month just to make coffee and tea. And they will not even be required to do the dishes.

Replace that with a foreign maid and you will see business dropping faster than the stock market crash. Today, there are far too many choices for customers to pick and choose from- if the drink sucks, people will rather go to a food court to get more food variety choices.

It’s because life’s so tough, their kids usually run 10 miles off when asked if they are interested to take over their parents’ business. In Ipoh, one of the towns in Malaysia, there is a very famous chicken rice stall. It is known all over the country and people from other towns sometimes drive hundreds of miles away just to eat at the rundown shop. But the stall owner’s children would rather go out and work than to take over their parent’s multimillion chicken rice business.

My best friend’s late father opened a motorbike repair shop- well, her mom actually runs the shop and is in charge of the workers while her dad did more ‘field’  work. My friend had refused to take over the business because of the crazy working hours and lack of mental stimulation and challenge. Instead, she study very hard, earned her Masters and climbed the corporate ladder. Even though her work now is very stressful, she told me she would rather draw a regular salary than to open her own business.

So, do you still want to be a hawker?

Do you still want to be a hawker…or are just burnt out from your job?
6 Considerations Before You Quit Your Day Job (Without a Job)